Train like the Rock with his Black Adam Workout If Dwayne 'The Rock' Johnson already didn't have an impressive physique at 48 years old, he announced while training for Black Adam that he had to take it up a notch and get into the best shape of his life for 'the big one' as he calls it. While there is no official released workout program, you may remember that he posted about his training on Instagram and lucky for us even gave us a couple of the actual workouts he did!

Below, is all the information we have collected from The Rock's various Instagram posts regarding his Black Adam workout preparation, so you can get some idea of what his training week looks like and even try a workout yourself.

The Rock's Training Split
Dwayne Johnson starts everyday with a fasted cardio session (performing cardio on an empty stomach) before working out with weights. This is to help increase fat loss during the muscle building process.

During an Instagram video, the Rock shares one of his chest and tricep workouts while preparing for Black Adam. Johnson starts his chest workout with three "giant sets" of four exercises: flies, chest press, incline press and bodyweight dips, all of which are performed until failure(as many reps as you can do). Then, after a brief rest, he moves onto three sets of four different exercises that target the long, lateral and medial heads of the tricep. We only have the official chest workout below but for triceps we suggest using any exercises and following the same format as below.

*Perform each exercise back to back for one 'giant set', complete 3 total 'giant sets'

1A) Cable Fly: 3 giant sets of failure (use a heavy weight and do as many reps as you can )

1B) Flat Dumbbell Bench Press: 3 giant sets of heavy failure (use a heavy weight and do as many reps as you can)

1C) Incline Dumbbell Bench Press: 3 giant sets of heavy failure (use a heavy weight and do as many reps as you can) The Rocks leg session begins with a 20 to 30 minute stretching session. Once that's done, will he move onto the actual workout, which is again giant sets similar to his chest workout. Below is the exercises he uses on his giant-sets along with some recommended reps:

Although the Rock has explained pretty thoroughly how he worksout, his chest triceps and legs, he hasn't revealed much of the rest of his workouts. So here's what he did say about it: The Rock's back workout has all giant-sets, so he'll take four or five exercises, combine them and do that for three sets. "There's nothing like pushing and pulling and taxing your central nervous system," he says.

His shoulder workouts are designed to maximize the blood volume (also called the pump), while keeping his shoulders' strength an shape intact. From that, we can assume that he's working with high reps and potentially using some of his favourite training methods like supersets or giant-sets to achieve the volume he mentions. While this isn't necessarily a complete workout program that you can follow, we did want to share something very important which is how he trains. We recommend that you give one of the workouts above a try and then for the workouts not mentioned, plug in your own exercises under the guidelines and methods the Rock uses. We also want to mention that is you're a beginner and believe that you will look like the Rock in a couple months, that isn't going to happen. Dwayne Johnson has been working out since he was a young teenager and slowly overtime has built the physique we all know and love today. Use this workout plan to get you started on your journey or to mix things up with your current routine. This workout is sure to help build muscle, burn fat and get you into better shape than you are right now! Give it a try and let us know how it went!

Is Tuesday a rest day too? I don’t see it on here.

Gimme more so I can smell what rock is cooking

Let customers speak for us

The suit is amazing!! The feel of the material is top notch. I feel like I could jump into the speed force and run for days! The layers for the ribbing feels great. The material has just the right amount of stretch to give you some breathing room but also keep you tucked in. The addition of the ankle zipper is great because I have very large calves, which allows you to get in and zipper up to have that nice tight ankle fit. There are plenty of pockets both in the hoodie and the pants. I actually just found the 2 additional pocks on the inside. The little zippers tuck away nicely to keep with the stream line look of it. The color of the material is more on the darker side, but in pictures it looks bright red. It must be some effect of the speed force. If you are doubting weather or not to buy one, stop and hit that order button! You won't be disappointed.
Full disclosure: For sizing purposes, I am 5'10" 225lbs and I bought a large for top and bottom. The pants are a few inches on the long side that bunch at the bottom, but nothing crazy. 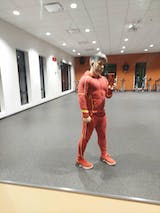 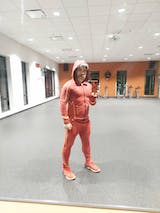 As expected this was way better than we thought ! Thanks SuperX. This needs leggings ! 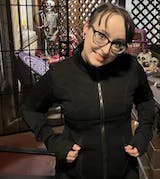 Awesome suit the delivery was delayed but worth the wait 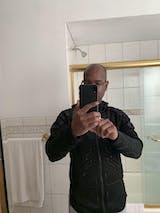 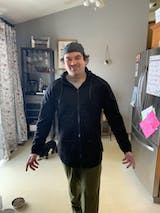 Feels great and I can't wait for more suits to showcase 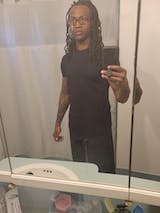